The Hotel Lido degli Spagnoli is a 4 star only steps from the sea and from the beach of Portopaglietto.
Portopaglietto is the beautiful beach of the city of Portoscuso. It has a small sandy shore characterised by crystalline sea and fine, amber-coloured sand and it is enclosed by two cliffs that shelter it on days with northwest wind. The Tower of Portoscuso stands prominently at the side of the small bay.

The Lido degli Spagnoli is easy to reach with all forms of transport and it looks out onto the island of San Pietro, enjoying a strategic location in relation to the main resorts and most beautiful attractions of the south of Sardinia.
The Hotel Lido degli Spagnoli is equipped with all the comforts that guests can expect in a 4 star hotel.
It has a large and well-equipped conference room, an elegant swimming pool, a restaurant with sea view, a magnificent free beach very close by and a wellness centre with panoramic views. 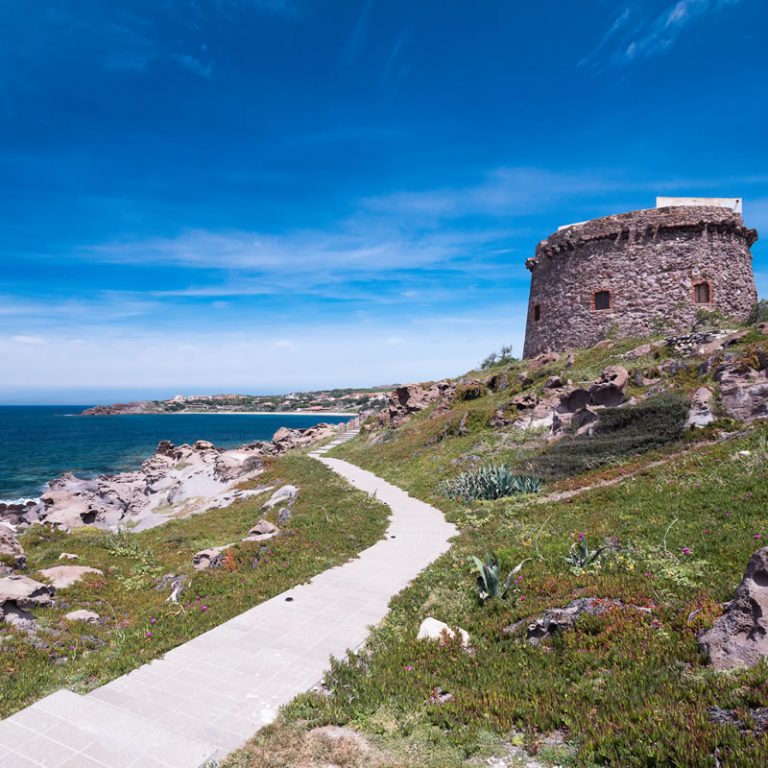 Geographically, this part of the coastline looks north towards the coasts of Andalusia, almost close enough to see them through the mist. The history of Portopaglietto has always had many mysterious and hidden but fascinating elements, for example the legends of its origin and the way in which the events of 1323 in Canyelles influenced the entire history of Sardinia and Spain.

The name of the hotel, “Il Lido degli Spagnoli”, discreetly but with a friendly audacity refers to actual historic events at the beginning of the fourteenth century. On 13 June 1323, the infant Don Alfonso of Aragon disembarked “with his fleet of 60 galleys and a further 500 other boats with 20,000 men” in the Golfo di Palmas. He arrived at the plain of Canyelles to install his camp with which to attack Villa di Chiesa (now Iglesias) as reported by Casalis and General La Marmora, and in this way begun the invasion and domination of the Spanish across the whole of Sardinia. The arrival of the infant Don Alfonso near Portoscuso was marked by terrible winds, as demonstrated when, a few weeks before 25 June, an Aragonese ship was wrecked during
a storm near the island of San Pietro. Six sailors and the son of a knight lost their lives in this incident. The same Don Ramon de Peralta (a nobleman from Aragon) risked being swallowed by the sea in the storm.

“Lido degli Spagnoli” – because from that time the Aragonese fishermen discovered the renowned abundance of tuna in the seas of this fortunate stretch of the south. During the season (from mid-April to mid-June) and from Capo Pecora to Porto Paglia and to Capo Altano, it welcomes the dense
schools of tuna which are so inviting and captivating that they inspired the “mattanza” (Sicily’s ritual tuna hunt). Puerto Ascondido … Porto Escuso “hidden harbour” …from that time Portoscuso provided an easy landing place for Spanish ships which, after rounding the Cape of Portopaglietto, could rest in the tranquil and safe natural harbours. At the beach of Su Pranu they would prepare the abundant and precious fish, replenish their fresh water a few steps from the surf and restock their supplies through commercial exchanges with inhabitants from inland.

This site uses cookies, including third parties, to send you advertising and services in line with your preferences. If you want to learn more or opt out of all or some cookies click here . By closing this banner, scrolling this page or by clicking any of its elements consent to the use of cookies. Ok